Passionate about the wilderness and survival techniques, Tamar completed in 2018 her qualifications as a wilderness guide. In the Canadian Rockies she learned about the local edible plants, herbal medicine, animal tracking and survival-skills. She is qualified for Wilderness First Aid both under the International Wilderness Association and the Canadian Red Cross. She is an Interpretive Guide (IGA Canada), an International Wilderness Guide (WGA) and Canadian Woodsland travel and survival instructor. She just can't stop adventuring, doing a few major expeditions each year, and filling the gaps with small ones.

She bought a horse, a camel and got a dog and walked the remote Altai Mountains for 4 months, learning the ancient art of eagle hunting.

"I live well below the poverty line, but I feel incredibly rich. Rich in friends, experiences, memories, dreams and love."

After cycling 12.000 kilometers around the world and riding Mongolia, in December 2018 she set off with Miriam Lancewood (author of 'Woman in the Wilderness') on an Epic Female Expedition in New Zealand: two girls, two guns, almost 3 months surviving on hunting and gathering edible plants. They roamed with heavy backpacks and rifles over 8 mountain passes, well away from trails and tracks, and discovered the heart of the wilderness. A Canadian filmcrew as well as the Dutch Floortje Dessing filmed the two in their last week. See Media page.

Immediately after leaving Miriam in New-Zealand she flew to Jordan to hike the length of the country, from Um Qais (Syrian border) to Aqaba (red Sea), with a donkey! Together they travelled 650 kilometers from the green north, through the barren midlands, conquering many deep wadi's and finally crossed the desert. Her donkey Yustra helped her with carrying enough water and was a great magnet to the handful of bedouines they met on the way.

Tamar continued on to have one adventure after the other. In 2019 alone she went to New-Zealand, crossed Jordan, then cycled 1000km through Europe on a tandembike, rode two more months on her horses through Mongolia, hiked the mountains in Japan (including Fuji), went rockclimbing in Vietnam, hiked the Himalaya, started writing her book and trained Jiu Jitsu in Australia and finished the year on a bush expedition with the Maasai tribe in Kenya, where she celebrated her 33rd birthday with an unsupported climb of mount Kenya. And life has continued on like that. For seven years she has been adventuring non-stop now. Recently, she iceskated several thousands of kilometers on remote lakes, rivers and even on sea; skied for many months through Lapland, sleeping in her tent under the northern lights; hiked over a 1000km through Iceland, where she expanded her skills in iceclimbing and glacier travel. Plans for the future? They change by the day, she's never too sure.

Vorige
Volgende
“Tamar is a unique combination of a well spoken, intelligent lady & a strong and wild survivor. She thrives in extreme situations because of her hunger for adventure and desire to explore the unknown, both psychologically and physically. We ventured together for 3 months, and I have only seen immense courage and optimism. She was able to hunt: to observe, stalk, and to shoot with precision. And thanks to her background as a high-end chef, we had a most delicious meal every day.”

Miriam Lancewood
Woman in the Wilderness
“Tamar has the adventurous spirit of Marco Polo, the tactical brain of Chingghis Khan, and a zest for life to rival the greatest poets of the age. May her horses be strong, her journeys unexpected and her experiences abundant. It has been an honour to join in on some of her adventures” 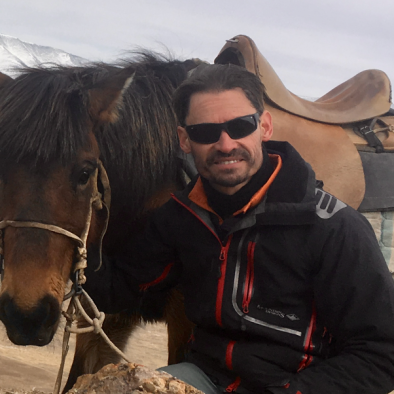 Kerim
Professor Biomechanics
Like what you see? Check out the adventures you can join.
GO EXPLORE